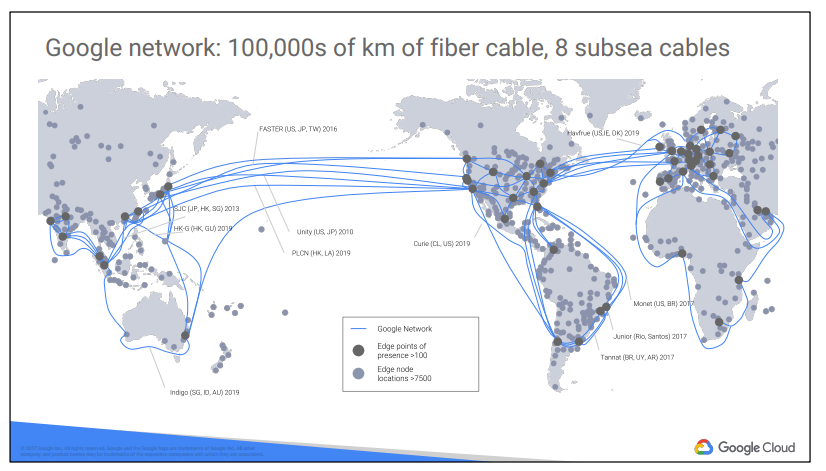 Cloud computing has five fundamental attributes, according to the definition of cloud
computing proposed by the United States National Institute of Standards and
Technology.

First, customers get computing resources on-demand and self-service. Cloud-computing customers use an automated interface and get the processing power, storage, and network they need, with no need for human intervention.

Second, they can access these resources over the network.

Fourth, the resources are elastic. Customers who need more resources can get more
rapidly. When they need less, they can scale back.

And last, the customers pay only for what they use or reserve, as they go. If they stop
using resources, they stop paying The first wave of the trend towards cloud computing was colocation. Colocation gave users the financial efficiency of renting physical space, instead of investing in data center real estate.

Virtualized data centers of today, the second wave, share similarities with the private data centers and colocation facilities of decades past. The components of virtualized data centers match the physical building blocks of hosted computing—servers, CPUs, disks, load balancers, and so on—but now they are virtual devices. Virtualization does
provide a number of benefits: your development teams can move faster, and you can turn capital expenses into operating expenses. With virtualization you still maintain the infrastructure; it is still a user-controlled/user-configured environment.

About 10 years ago, Google realized that its business couldn’t move fast enough within the confines of the virtualization model. So Google switched to a container-based architecture—a fully automated, elastic third-wave cloud that consists of a combination of automated services and scalable data. Services automatically provision and configure the infrastructure used to run applications. 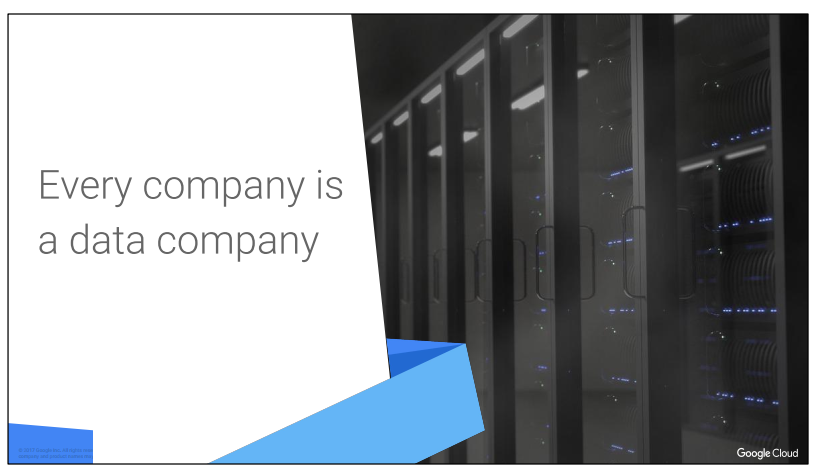 Google believes that, in the future, every company—regardless of size or industry—will differentiate itself from its competitors through technology. Largely, that technology will be in the form of software. Great software is centered on data. Thus, every company is or will become a data company.

Google Cloud provides a wide variety of services for managing and getting value from
data at scale. Virtualized data centers brought you infrastructure as a service (IaaS) and platform as a service (PaaS) offerings. IaaS offerings provide you with raw compute, storage, and network, organized in ways familiar to you from physical and virtualized data centers. PaaS offerings, on the other hand, bind your code to libraries that provide access to
the infrastructure your application needs, thus allow you to focus on your application logic.

As cloud computing has evolved, the momentum has shifted toward managed infrastructure and managed services.

According to some publicly available estimates, Google’s network carries as much as 40% of the world’s internet traffic every day. Google’s network is the largest network of its kind on Earth. Google has invested billions of dollars over the years to build it.

It is designed to give customers the highest possible throughput and lowest possible latencies for their applications.

The network interconnects at more than 90 Internet exchanges and more than 100 points of presence worldwide. When an Internet user sends traffic to a Google resource, Google responds to the user’s request from an Edge Network location that will provide the lowest latency. Google’s edge caching network sites content close to end users to minimize latency 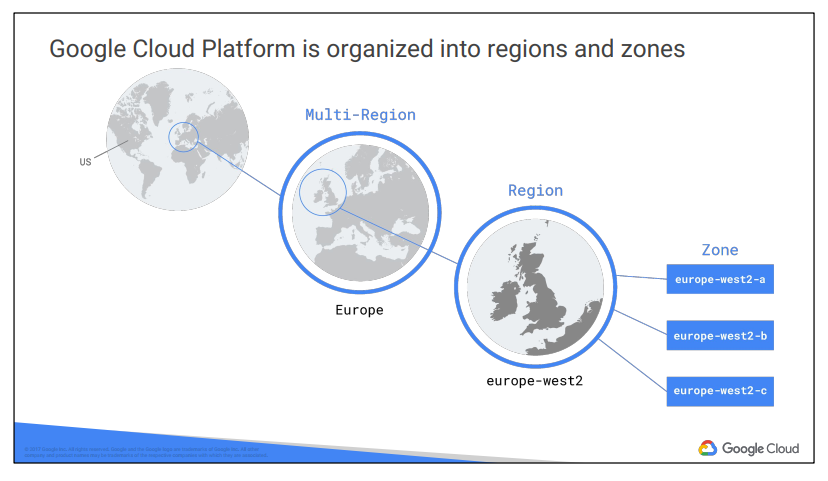 Regions and zones
Regions are independent geographic areas that consist of zones. Locations within regions tend to have round-trip network latencies of under 5 milliseconds on the 95th percentile.

A zone is a deployment area for Google Cloud Platform resources within a region. Think of a zone as a single failure domain within a region. In order to deploy fault-tolerant applications with high availability, you should deploy your applications across multiple zones in a region to help protect against unexpected failures.

To protect against the loss of an entire region due to natural disaster, you should have a disaster recovery plan and know how to bring up your application in the unlikely event that your primary region is lost. For more information on the specific resources available within each location option, see Google’s Global Data Center Locations.

Google Cloud Platform’s services and resources can be zonal, regional, or managed by Google across multiple regions. For more information on what these options mean for your data, see geographic management of data.

Multi-regional resources
A few Google Cloud Platform services are managed by Google to be redundant and distributed within and across regions. These services optimize availability, performance, and resource efficiency. As a result, these services require a trade-off on either latency or the consistency model. These trade-offs are documented on a product-specific basis. The following services have one or more multi-regional deployments in addition to any regional deployments: At the time of this writing, Google Cloud Platform has 17 active regions, with more to come 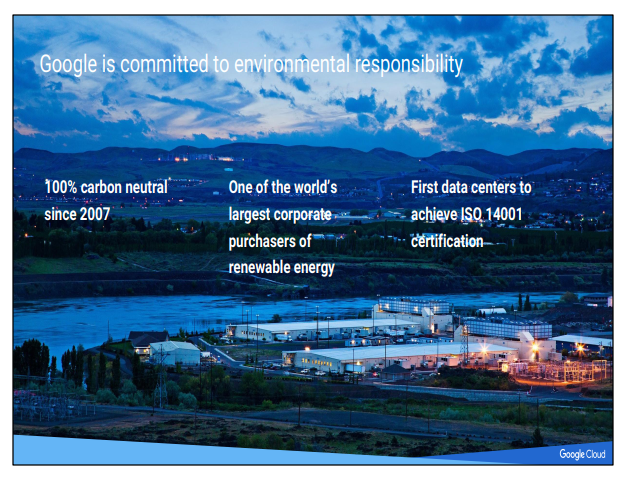 This image shows Google’s data center in Hamina, Finland. The facility is one of the most advanced and efficient data centers in the Google fleet. Its cooling system, which uses sea water from the Bay of Finland, reduces energy use
and is the first of its kind anywhere in the world.

Google is one of the world’s largest corporate purchasers of wind and solar energy. Google has been 100% carbon neutral since 2007, and will shortly reach 100% renewable energy sources for its data centers.

The virtual world is built on physical infrastructure, and all those racks of humming servers use vast amounts of energy. Together, all existing data centers use roughly 2% of the world’s electricity. So Google works to make data centers run as efficiently as possible. Google’s data centers were the first to achieve ISO 14001 certification, a standard that maps out a framework for improving resource efficiency and reducing waste. 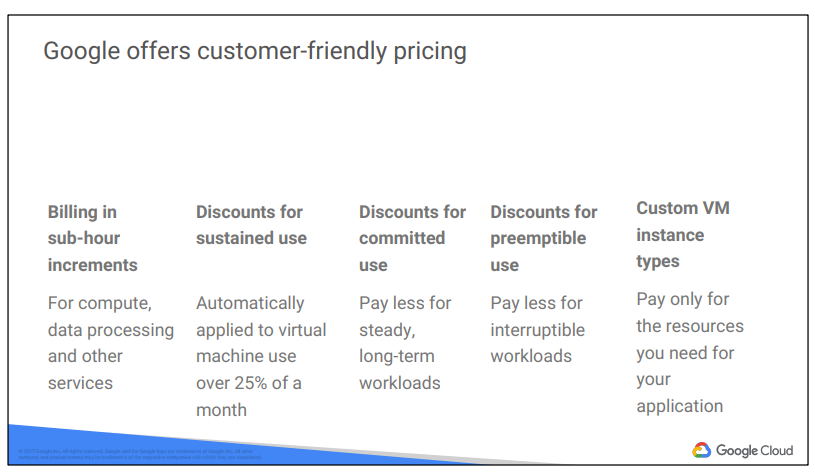 Google Compute Engine offers automatically applied sustained-use discounts, which are automatic discounts that you get for running a virtual-machine instance for a significant portion of the billing month. Specifically, when you run an instance for more than 25% of a month, Compute Engine automatically gives you a discount for every incremental minute you use for that instance.

Custom virtual machine types allow Google Compute Engine virtual machines to be fine-tuned for their applications, so that you can tailor your pricing for your workloads.

Try the online pricing calculator to help estimate your costs. 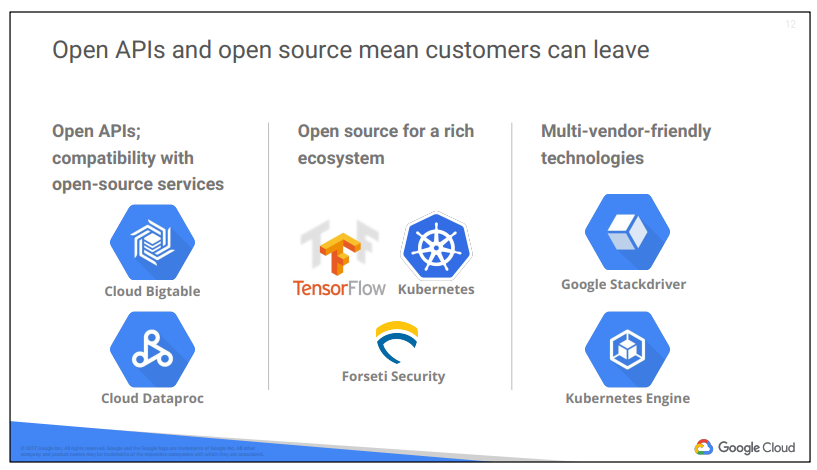 Google gives customers the ability to run their applications elsewhere if Google becomes no longer the best provider for their needs.
This includes:

● Google publishes key elements of its technology, using open-source licenses, to create ecosystems that provide customers with options other than Google. For example, TensorFlow, an open-source software library for machine
learning developed inside Google, is at the heart of a strong open-source ecosystem. 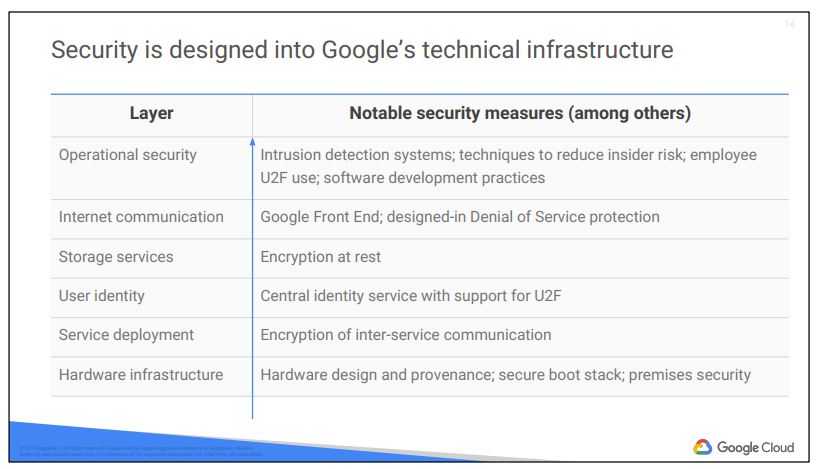 Hardware design and provenance: Both the server boards and the networking equipment in Google data centers are custom-designed by Google. Google also designs custom chips, including a hardware security chip that is currently being deployed on both servers and peripherals.

Secure boot stack: Google server machines use a variety of technologies to ensure that they are booting the correct software stack, such as cryptographic signatures over the BIOS, bootloader, kernel, and base operating system image.

User identity: Google’s central identity service, which usually manifests to end users as the Google login page, goes beyond asking for a simple username and password. The service also intelligently challenges users for additional information based on risk factors such as whether they have logged in from the same device or a similar location in the past. Users also have the option of employing second factors when signing in, including devices based on the Universal 2nd Factor (U2F) open standard.

Encryption at rest: Most applications at Google access physical storage indirectly via storage services, and encryption (using centrally managed keys) is applied at the layer of these storage services. Google also enables hardware encryption support in hard drives and SSDs.

Google Front End (“GFE”): Google services that want to make themselves available on the Internet register themselves with an infrastructure service called the Google Front End, which ensures that all TLS connections are terminated using correct certificates and following best practices such as supporting perfect forward secrecy. The GFE additionally applies protections against Denial of Service attacks.

Denial of Service (“DoS”) protection: The sheer scale of its infrastructure enables Google to simply absorb many DoS attacks. Google also has multi-tier, multi-layer DoS protections that further reduce the risk of any DoS impact on a service running behind a GFE.

Reducing insider risk: Google aggressively limits and actively monitors the activities of employees who have been granted administrative access to the infrastructure.

Employee U2F use: To guard against phishing attacks against Google employees, employee accounts require use of U2F-compatible Security Keys.

Software development practices: Google employs central source control and requires two-party review of new code. Google also provides its developers libraries that prevent them from introducing certain classes of security bugs. Google also runs a Vulnerability Rewards Program where we pay anyone who is able to discover and inform us of bugs in our infrastructure or applications. 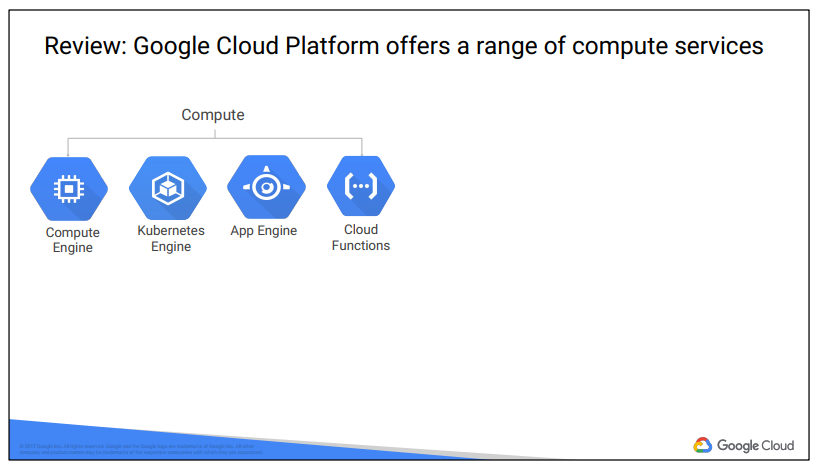 Google Cloud Platform’s products and services can be broadly categorized as Compute, Storage, Big Data, Machine Learning, Networking, and Operations/Tools. This course considers each of the compute services and discuss why customers might choose each 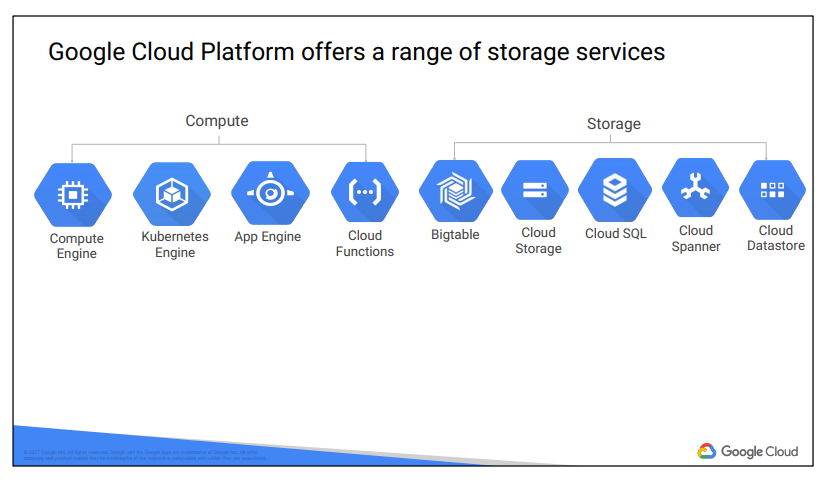 This course will examine each of Google Cloud Platform’s storage services: how it works and when customers use it. To learn more about these services, you can participate in the training courses in Google Cloud’s Data Analyst learning track. This course also examines the function and purpose of Google Cloud Platform’s big data and machine-learning services. More details about these services are also available in the training courses in Google Cloud’s Data Analyst learning track.